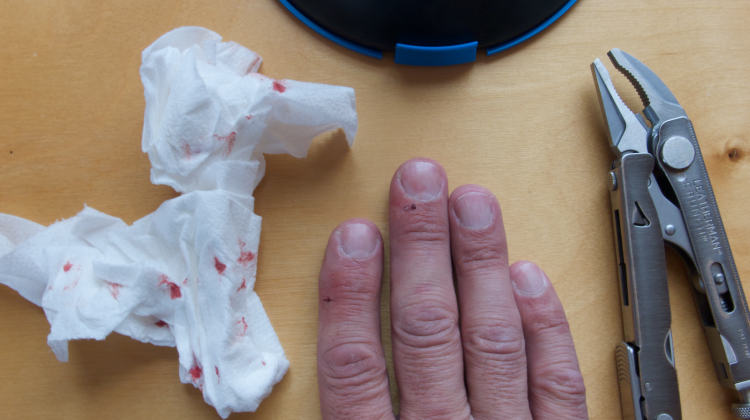 I’m not really Jack Flash, but for some reason this snap reminded me of the photo of Mick Jagger’s cut hand in the seventies. And I do like the song. Warhol might have done a print of Jagger’s stitched hand…. We have been constantly adjusting car camera mounts over the last three days to get positioning and exposure correct. We will more than likely budget for some helicopter shots – so all of the car research will be “somewhat” transferrable. So all the while I’m digging around for a screwdriver or allen head wrench to relocate the mounts or the cameras that are attached. After having lost both screwdriver and allen head wrenches – it was recommended that a version of the “Leatherman-All-Purpose-Tool” might be an advantageous purchase. The model that seemed best equipped was “the Cruncher”. So it arrives today and after having cut it from it’s plastic display casing – I was ready to give it a whirl. So I open it up and… it was like having a pissed-off cat in a burlap bag that had been on a centrifuge for 2 hours while drinking Scotch on the rocks – the first thing it does is pinch me a good one and then it proceeds to slice at my fingers (see above). (The thumb was lost, that’s not trick photography). It also unscrewed my belt buckle, sawed a leg off of a small wooden table and cut, from my edit, about three minutes of run-time before I wrestled it shut and back in it’s case. This is definitely an outdoor tool.

You have been warned.