By late 2008, I had graduated from Pinky & Perky to a new job as companies editor, running the news desk responsible for corporate coverage. Two weeks in, I flew out to visit our New York bureau. When I boarded the plane, on the morning of September 15 2008, Lehman Brothers and insurance giant AIG were still doing business. By the time I had landed, Lehman had gone under and AIG was in special measures.

The atmosphere on Wall Street was electric. My colleagues and I went for a drink in the evening beside the Lehman building, which had a ticker tape screen running around it that — in normal times — displayed stock prices. That night, I remember the screen being filled with fire.

If intended, the visual commentary certainly hit the mark. It was not just the financial system that looked set to go up in flames — but also many of our prevailing assumptions as FT journalists. 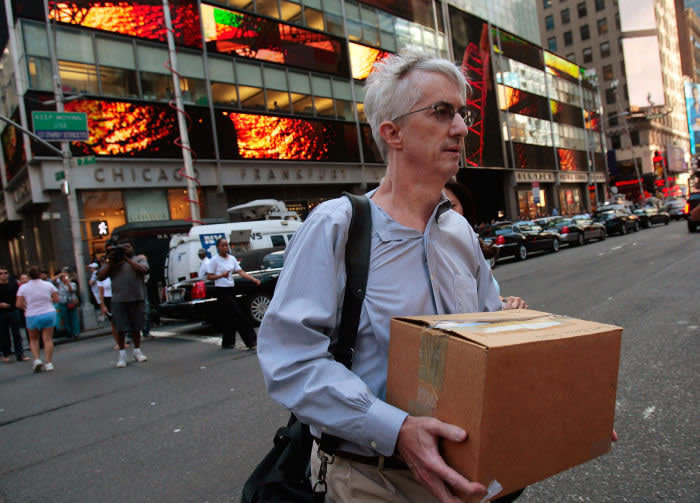 A Lehman Brothers employee leaves the headquarters on September 15 2008 in New York © GettyAt the FT as elsewhere, we had missed most warning signs. Looking back on what I wrote for the FT’s Lex column in the run-up to the crisis I am struck by my — and colleagues’ — relative complacency. I warmly praised the decision by Spain’s construction companies to diversify overseas (a leading cause of their downfall), and forecast an “undramatic” divergence in European sovereign debt spreads. We thought we were sceptical observers, pointing out dangers that others were not clever enough to spot. Maybe not . . .